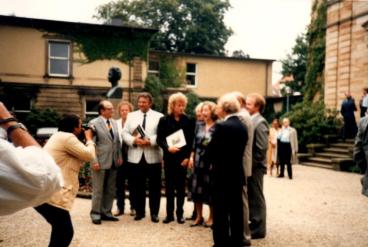 This is the first summer since 1985 that I have nothing at all planed regarding a festival visit. I have seen much around the world and I got a bit tired of the ‘merry go around’ of masterpieces dressed up in so called modern interpretations. I just did watch the 1979 ‘Götterdämmerung’ from Bayreuth on YouTube and cant refrain to put some more thoughts about Richard Wagner and his opera on paper.

Though I haven’t seen the famous ‘Chéreau-Ring’ in Bayreuth, I have watched many videos about this production during the decades. But my first meeting with this splendid art work was during a stay at Pflaums Posthotel near Bayreuth, a famous hotel ‘dedicated’ to Wagner.  One could sit next to a fire place and watch videos. I can say that during these years Bayreuth still a profound flair of art and music on a very familiar level though the many international true opera lovers gave the town a festive ambiance in summer. Spending also much time in Bayreuth during the year round, doing research in the archives, I did plunge much deeper in family and town history. Interesting insights on all levels.

Excursions into the country side had a special charme, unchanged since maybe ages. Remembering spending some nights at a small castle-hotel outside the city in winter. I was the only guest and one night I could not drive up there because of icy snow, parked my car in a farmers yard at 2am and had a romantic walk up under the stars to the hotel. Had to awaken the manager since I did not have my key for the front door.

Watching the Chéreau vidoes again today I can say that this production is still a brilliant highlight for me. From 1985 – 2007 I did go regularly to the Bayreuth Festival and have seen most productions there and of course also the ‘Ring’- Cycles. 1986 I did see and like the last performance of the Hall-Ring and contrary to all the negative comments by the media the public did give an enthusiastic farewell applause which took forever. I still remember a fabulous Hildegard Behrens and Peter Schneider conducting.

After this came the ‘Ring’ from Harry Kupfer with Daniel Barenboim in the pit. The transcendental approach towards Wagner’s operas started to fade away. Compared to Pierre Boulez’ conducting in the ‘Chéreau-Ring’ this was certainly not a good match. It did seem that a philosophical understanding was not an approach anymore to be seen in Bayreuth often, though ‘Tristan’ from Jean Pierre Ponelle was another highlight regarding aesthetics and interpretation. I did see the last performances in 1986 several times and suffered through with Peter Hofmann one time, when he was sick and could barely sing the 3rd act. A kind of pseudo romantic ‘Ring’ could be seen 1994-1998 staged by Alfred Kirchner and James Levine conducting with much PR about the stage by Rosalie, with whom I had an interview and discovered that her knowledge about the Ring was poor. During those years I did meet, talk and interviewed many so called famous opera people in Europe and in the United States. Most of them still had a highly idealistic approach towards their art work. One name: Günther Schneider-Siemssen who worked with Herbert von Karajan for many years, together they did put magic on the stage with deep impact on souls. Also Stefanos Lazaridis was a Master of stunning stage stettings – mostly for the Bregenz Festival – but he and Keith Warner did a great ‘Lohengrin’ at Bayreuth. The Scala ‘Ring’ with Muti tried to be romantic but without depths.

The last ‘Ring’ I did see in Bayreuth was the production of Jürgen Flimm and Guiseppe Sinopoli which I do not remember at all. But I did like the Götz Friedrich production at Deutsche Oper Berlin which I did see 2-3 times. I did follow the new ‘Ring’-Production at the Met with Günther Schneider-Siemssen which was very good but I must say that the ‘Chéreau-Ring’ had much more substance and did show the deep philosophical dimensions of the art work in a pure and convincing style, similar to the Old Greek Drama tradition.

After having ‘suffered’ through Katharina Wagner’s ‘Meistersinger’ in 2007, I did never return to Bayreuth and still do not understand why this highly outstanding festival is now handled like a franchise family chain, without wanting to insult the artists who give much each summer. Certainly this insensitive approach was never the goal of Richard and Cosima Wagner who might by now have closed the place.

The actual ‘modern’ productions do not help art, we must not forget how to read the librettos and of course the music and show the drama intended by the composer, which cannot be replaced with dull superficial scenery. Our existence is (at the least) a long story – maybe a fight through many incarnations – and to stage Wagner’s operas without these aspects does not correspond with his intentions.

During the season 2019 an opera house started to stage ‘Götterdämmerung’ as a start of the ‘Ring’. Why this ? Maybe as a reason to get headlines in the media? Though in the ‘Götterdämmerung’ many happenings can be seen in a kind of retrospection, still this is not a good thing to do since the entire drama will not unfold fully and in depth.

With all the problems we do have on the planet nowadays a consideration of the possibility of reincarnation might be helpful and the operas of Richard Wagner are based on this fact. To belittle them and make a good show with sex, drugs and fun as main message is a total misuse of art and life and does not reflect the language of the music.

I only can wish that the opera hype and event celebration of opera productions might turn into a true artistically experience again, the world could heal better by this approach.

Excuse my English but I have written in this language since more people can share my feelings.

For a classical opera singer talent does build a base of maybe 30%!

Studying the basic technics for some years another 30%!

But this is often not enough for a successful career as a soloist. The last 40% which will provide enough stamina and determination, self-trust, and the power to pursue a long career are based mostly on psychological and spiritual tools.

I have studied these ‘interior dimensions’ of success since more than thirty years and I am confident that I could help many talents to prosper during many years in harmony with creative abundance and self awareness. See my flyer, do not hesitate to contact me if you feel that this could enforce your artistic and human potential.

In my book – published long ago – I did bring out the resemblance of Wagner’s operas with the ancient Indian Philosophy of karma and reincarnation.  The RING, a karmic story, was outlined therein page by page as a story based on the principles of Vedic philosophy. This is not at all admitted in the West, even after more than two hundred years things do get put on stage with all kind of confusions and misunderstandings.

In Wagner’s memoirs  Das braune Buch  we can read a most interesting quote about the Ramayana. Wagner and his wife Cosima did read frequently the Far Eastern Scriptures, as did Liszt, von Bülow and many other close friends, inspired as well by Arthur Schopenhauer, who owned hundreds of books about this topic. (Can be seen at Schopenhauer Archives in Frankfurt, Germany.)

On page 55 – 57/Aug 1863 we read: “I am disturbed about your (Cosima) visit in Pesth, will take a book:  Ramayana! – Later: O what a beauty the Ramayana, what kind of a world is unfolding! An incredible piece of art, modern literature just seems insignificant. I am in book II: All is alive and does sound for me as real. – Rama is divine, a most beautiful drama is unfolding in my mind, but can I do it? – Rama and Sita and Lakshmana in the forest. A most beautiful poem, divine country of Ganga.  – Good morning dear (Cosima), Rama is around me. All is going down, tears, pain. I do see the queen who did create this sorrow, I see Marantha the hunch back, who is coldly talking to me.”

Should be reprinted and refreshed. Time to see some news aspects about these operas!